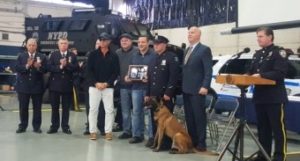 Brooklyn, NY, December 1, 2017 – On Friday morning, December 1, 2017, the Hometown Foundation, Long Island Exotics Club (LIEC), and K-9 Crime Stoppers were acknowledged at the graduation ceremony for the New York Police Department Emergency Service Unit Canine Team. Earlier this year the Hometown Foundation, LIEC & K9CS, Inc. teamed up to donate two special dogs to the NYPD ESU. At the ceremony for graduate K-9 Tommy who they donated this past February, and 11 other K-9’s entering the Police Force, the Honorable James P. O’Neill Police Commissioner and the NYPD thanked the charitable organizations for their donations. The graduation was held at the Aviation Hangar at Floyd Bennett Field in Brooklyn, NY.

K-9 Tommy was raised and trained as K-9 Max by the K-9 Crime Stoppers organization, a Puppies to Police Dogs charity. The Hometown Foundation and the Long Island Exotics Club connected the K-9 to the NYPD ESU and after a series of strenuous tests, the Emergency Services Unit accepted the canine into their next training class.

K-9 Max went through a vigorous certification program at the top of his class. Max was ready to start protecting the streets of New York, but first he had to serve the Police Community in a different way. K-9 Max was renamed K-9 Tommy after NYPD’s fallen officer Tommy Langone, who was killed in the line of duty. All 12 recent graduates carry the honor of being named after a fallen NYPD hero.

About the Hometown Foundation: Hometown Foundation is a non-profit dedicated to enhancing the quality of life for individuals and their families. This charitable foundation honors and assists six distinct areas of interest: Children in Need, Major Illness, Intellectual Disabilities, Military, Emergency Response Personnel and Animal Welfare.
275 Schoolhouse Road
Cheshire, CT 06410

About the Long Island Exotics Club: (LIEC) is a group of car enthusiasts that have combined their love of cars and their passion for charities into a special membership. The LIEC focuses on having fun while giving back to those in need. #drivenbycharity #LIEC
Vanderbilt Financial Building
125 Froelich Farm Blvd.
Woodbury, CT 11797
(516) 660-9006

About K-9 CRIME STOPPERS: K9CS is a 501(c)(3) public charity whose mission is to raise, train and donate quality K-9s to communities in need. They advise and consult Police Dog and Search & Rescue handlers and administrators, problem-solve canine behavioral issues, and advocate for the importance of publicly supported and knowledgeable K-9 Teams in every municipality.
PO Box 311154
Newington, CT 06131

Thank you for your support of K-9 Crime Stoppers!